With the U.S. presidential election just three weeks away, the COVID-19 pandemic has sparked a massive frenzy to vote early.
For more on this and other news around the world, let's turn to our Kim Jae-hee.
Jae-hee, tell us more about the situation in the U.S.
Mok-yeon, like you said, there's been a surge in early voters as people sought for a safer way to cast their ballots amid the pandemic.
According to the U.S. Elections Project, more than 10-point-6 million voters had cast their ballot either in-person or via mail as of Tuesday local time.
That's more than seven times the number who had voted early at the same point four years ago.
Data also shows early voting in several states including Wisconsin, Minnesota, Virginia and Vermont has already exceeded 20 percent of their total votes from 2016.
Amid the frenzy, California is in a dispute with the Republican Party over unofficial ballot drop boxes, set up in at least three of its counties.
California on Monday ordered the GOP to remove all the boxes by Thursday, but the Republicans are refusing, saying state law does not specifically ban them doing what they're doing. 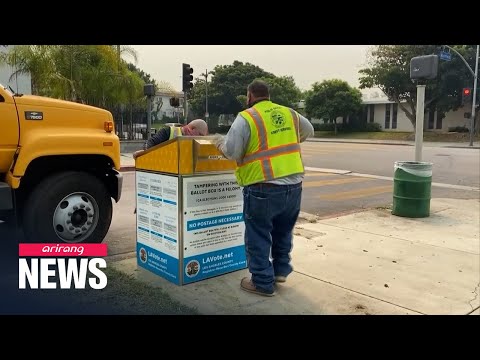